Home » Piper » July 16 – The Story Behind the Piper Video

Dr. Josiah Young, who examined and prescribed glasses to the infant in this viral video, talks about what preceded the video.

Can you briefly tell us a bit of the story behind this video?

The family had taken Piper, their 10-month old daughter, to the pediatrician's office. They had a concern about her development and crawling ability. The pediatrician performed a vision screening on her with an imaging device the looks at the reflex back from the child's eyes. It flagged a problem with her vision that was outside of the normal limits. They searched for an eye care provider in the Cincinnati area that specializes in seeing young children, and they made an appointment for Piper to see me. 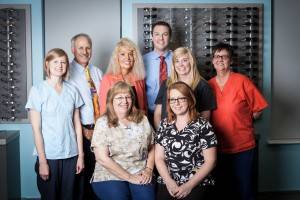 When I performed the exam, I initially suspected farsightedness, but this was confirmed with retinoscopy after dilating Piper's eyes. I explained everything to the parents and prescribed glasses for Piper. When she came to pick up the glasses, she was hesitant to wear anything on her head as most infants are.

So we encouraged the parents to try again later on when Piper was in a better mood. That's just what you have to do when working with young children. So they left our office and went down the street to a restaurant where they tried the glasses on her again. I think Piper's reaction in the video says it all.

What do you think it is about Piper's video that made it go viral? What has drawn so many people to it?

It's hard for parents of children with vision problems to understand the impact it has on their child's vision, until you see something like this. When she finally sees her mother clearly through the new glasses, the reaction is so genuine that it tugs on your heart. I love it when people tell me how much better they can see, and she did it at 10 months old!

Piper received an exam as part of the InfantSee program, is that correct? Can you tell us a little bit about that program and its importance?

Actually they were referred for an eye exam from the pediatrician, so this technically didn't fall under the InfantSee program. InfantSee is a national program that started 10 years ago to help promote early eye exams for children in the first year of life. Parents can go on to infantsee.org and find a provider in their area. These exams are done at no cost to the patient or their family. So because it's not cost prohibitive, the only barrier to getting infants checked is just getting the word out.

How common is it for small children like Piper to have difficulty seeing clearly, and how can a child's development be affected by vision issues like Piper's?

Some studies have shown that nearly 1 in 4 children have an undiagnosed vision problem. It's more common for infants to have a small amount of hyperopia (farsightedness), but in Piper's case the amount was high enough that it caused her difficulty, especially for seeing things close up. Kids with this amount of farsigtedness who do not receive proper correction with glasses often end up developing Amblyopia or lazy eye. But when the condition is caught early, like in Piper's case, just wearing the glasses will allow the child to develop normal, single, clear binocular vision.

At what age do you recommend that a parent bring their child in for their first comprehensive eye exam?

This may come as a surprise to most parents, but kids should have an eye exam in the first year of life, preferably between 6 and 12 month. But it is extremely important to have a child's eyes examined before the enter preschool. Many vision problems can be caught and corrected before the child gets into school. This prevents the child from having a disadvantage to learning due to a vision problem.

What would you say the take home message of Piper's story would be for parents with infants and small children?

The vision screenings done at schools and the pediatrician's office don't catch all vision problems. Having a comprehensive eye exam by an eye doctor is the best way to ensure your child goes into school with the proper vision so that they can see and learn their best.